Some of the rack-mount power distribution units in our product line have transparent plastic protective caps for power switch as standard. It would seem that it is a very ordinary device, and often underestimated (the cap is sometimes lost during installation). Over time, thanks to user reviews, we realized that this most primitive cap did a great job. Namely, it helped to avoid a great many situations where a simple detail prevented the accidental power off of very important systems.

The PDUs are mechanically secured to prevent accidental disconnection of the power cord. The use of C13 and C19 sockets with a latch increases the reliability of equipment connection.

One of the most important components of the physical infrastructure is a power network since the working capacity of other systems depends on it. Whether it is a data center (especially a data center), a server room of a small organization, even an ordinary computer, a sudden disconnection from the power source can lead to very sad consequences.

Therefore, there are infrastructure redundancy schemes, modern hardware, various uninterruptible power supplies, diesel generators and other ways to improve the reliability of the power network are widely used.

Ensuring the physical security of the connection also plays an important role. The use of C13 and C19 sockets with a latch increases the reliability of the equipment power source.

PDU with С13 and С19 sockets with a plug latch

Power distribution units with automatic latching are suitable for connecting a variety of devices and equipment. The units are manufactured from quality components in accordance with international standards, the design and shape of the connectors exclude commutation errors.

The plug is connected to the socket in a standard way, the plug is inserted by a light pressing.

In the connected state, the plug is automatically locked, secured by the latch plate of the spring-loaded mechanism for the grounding contact of the plug.

You can unlock the connection by pressing the latch release button and pulling the plug out of the socket. 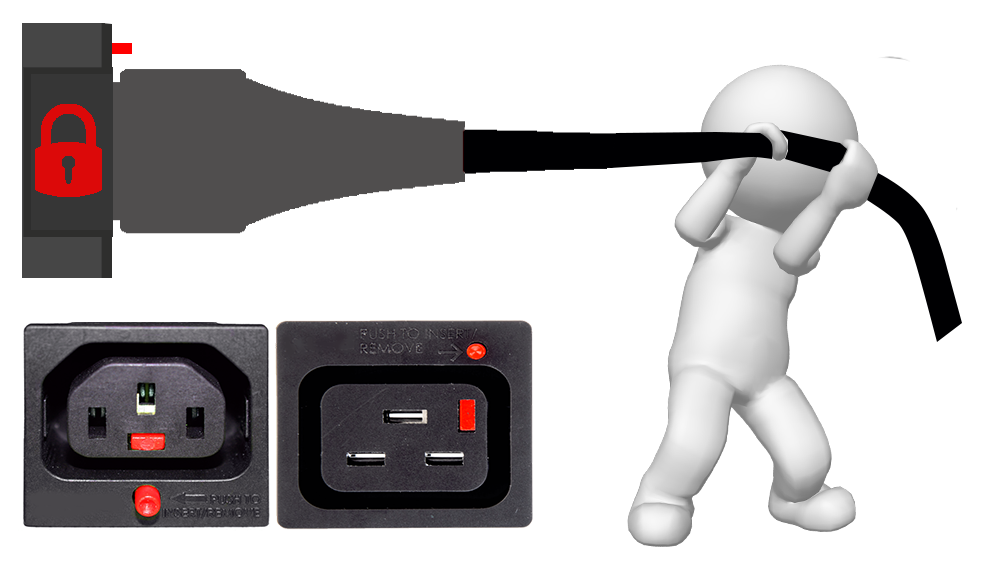 The problem of unexpected disconnection of equipment in the rack is solved with PDUs that protect each socket's connection. Certainly, these are the primary connections within the network and are of critical importance.

But unexpected situations with the disconnection of working active equipment are also not excluded. Imagine a situation when, during maintenance work the power cord fell out from the server in the same rack. Or even just while cleaning the office, a cleaning service employee touched out the power cable from your computer, and you have lost the work on an important project in the last couple of hours. In case the power cable is physically locked in the port, such problems are excluded by default.

Power cords are designed for industrial, office and other applications with voltages from 12 to 250 Volts, terminated on one side with C20 or Shuko plug, and on the other side with latching C13 or C19 connector. 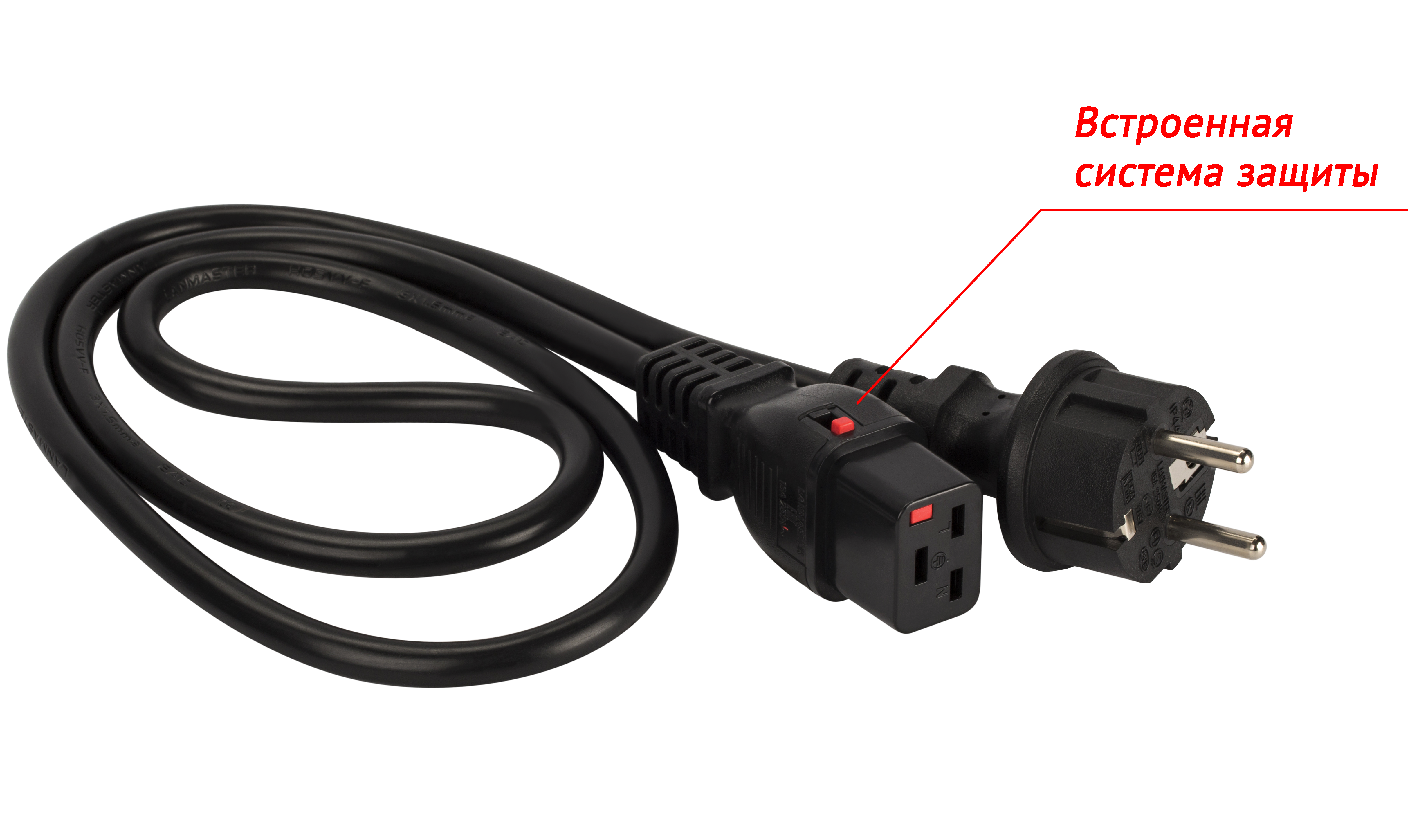 The cable socket is connected to the plug in a standard way, the socket is inserted by a light pressing. The socket has a standard size, therefore it is compatible with any standard C20 or C14 plugs.

Socket with built-in latch prevents accidental or intentional power disconnection of the device due to vibration or any mechanical stress on the cable.

In the connected state, the socket is automatically locked, secured by the latch plate of the spring-loaded mechanism for the middle contact of the plug.

You can open the connection by pressing the latch release button and pulling the socket out of the plug.

The cords in stock are of default lengths from half a meter to five meters. They are complied with international standards (IEC 602227-5 and DIN VDE 0281/5) and, designed to operate at temperatures from -5°C to +70°C. The cords in stock have black color. It is possible to manufacture cords of various lengths and colors when ordering in batch.

For the most part, the benefits of physical protection of power network are clear. It's more interesting with communication ports. On the one hand, there are a great many solutions based on software restriction of unauthorized access to the system. They are highly efficient, and outsiders cannot gain access to the network infrastructure without verifying the level of access. But on the other hand, it is obvious that sometimes such a remedy alone is not enough.

The scope of physical protection of access to communication ports is indispensable, for example, in common access areas. Therefore, medical institutions were in the forefront of these solution consumers. Both subscriber outlets and equipment racks are in the public access in schools, hospitals, shops, shopping malls and entertainment centers as a rule. Racks can be placed in corridors, or in other common access areas, where anyone can accidentally or deliberately damage the existing physical infrastructure.

The components of the physical lock system will also become a very convenient method of protecting important network connections in the data center. 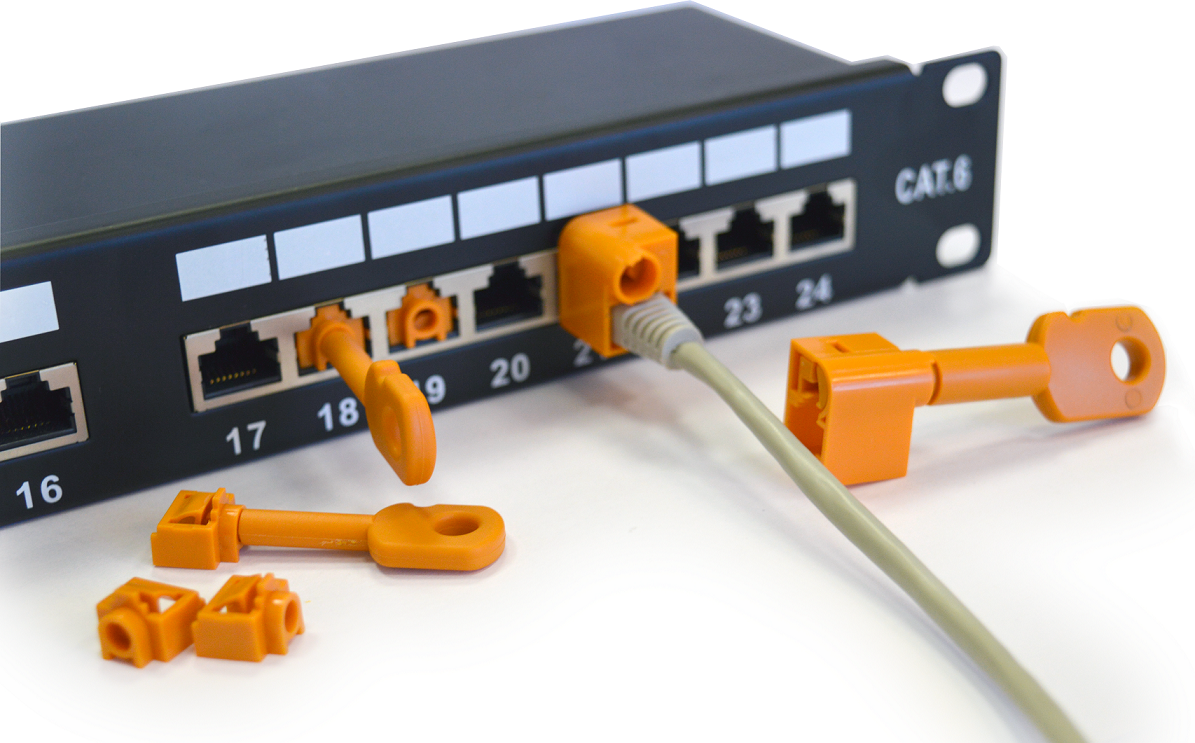 Designed to lock RJ45 plugs in a sockets of network switches or patch panels, by blocking pressing on the plug latch. This eliminates the possibility of intentional or accidental removal of the patch cord from the patch panel port or switch port.

Installation and removal of RJ45 plug locks is carried out using a special key that comes with the kit.

The locks are compatible with standard RJ45 patch cords, without additional plug latch protector in the design. 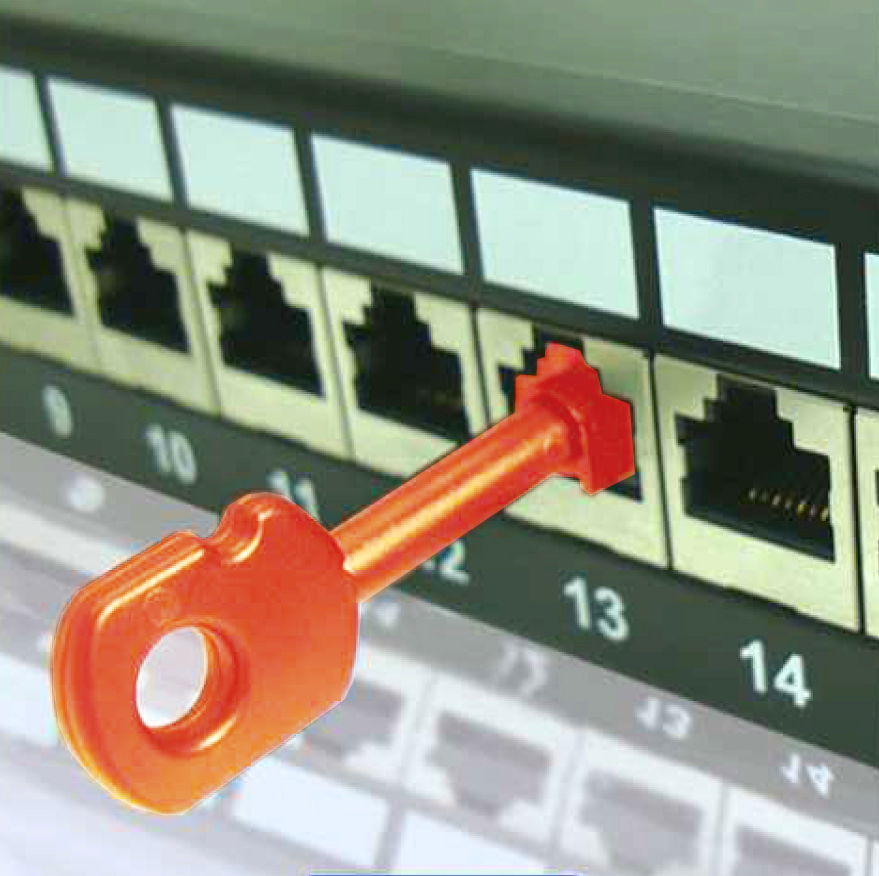 The locks are designed to protect the RJ-45 sockets from unauthorized access. With a dummy plug installed, the port cannot be wired. The plug is installed into the port using a special key that comes with the kit.

The locks are compatible with any standard RJ-45 sockets.

The components of the physical locking system will protect against unauthorized actions, prevent the threat of breaking the transmission channel. Access to them becomes possible only with a special key.